Stem cells in the human body have a unique ability to renew themselves and give rise to the more specialized cell types that do the work of the body. Stem cells remain unspecialized until a signal from the body tells them to develop into specific cells of the body like a heart, nerve, or skin cell. For years, researchers have been studying the unique characteristics of stem cells. The first stem cells studied by researchers were derived from adult tissues and, more recently, scientific breakthroughs have enabled research on stem cells that are removed from one of the earliest human cellular formations, the blastocyst.

What is a stem cell? What do stem cells look like under the microscope? How many types of stem cells are there?

What are the advantages and disadvantages of mature and early human stem cells?

We still have a great deal to learn about both mature and early human stem cells and their potential for treating and hopefully curing disease. Both have distinct advantages and disadvantages associated with them and each offer important insight into how cells rejuvenate the body and cause disease. See the below table for more information:

What is a mature stem cell?

Stem cells are associated with most tissues of the body as part of a tissue/cell renewal mechanism — how the body regenerates its tissues. What is known to date is that mature stem cells are primarily multipotent, meaning they can yield all of the cell types associated with the tissues from which they originate. The mature stem cell is an undifferentiated (unspecialized) cell that is found in a differentiated (specialized) tissue, which can renew itself for a lifetime. What is the role of mature stem cells?

Mature stem cells maintain and repair the body’s tissues in which they are found.

Can mature stem cells become any type of body cell?

Traditionally, mature stem cells have been considered limited in their potential to become any type of body cell. In other words, they only produce cell varieties within their own lineage or type and are considered multipotent. For example, stem cells found in bone marrow can become bone as well as cartilage, fat cells, various kinds of muscle, and the cells that line blood vessels.

Can mature stem cells be pluripotent?

Unlike early stem cells, there is no evidence to date that any mature stem cells are capable of forming all cells of the body. However, recent studies have demonstrated that mature stem cells may be more flexible than previously thought. More studies are necessary to validate these results.

Where can mature stem cells be found?

Sources of mature stem cells have been found in areas of the body including bone marrow, blood stream, cornea and retina of the eye, the dental pulp of the tooth, liver, skin, gastrointestinal tract, and pancreas.

What is the most common type of mature stem cell used today?

The mature stem cells associated with those that form blood in bone marrow are the most common type of stem cell used to treat human diseases today. How do mature stem cells treat diseases like cancer? 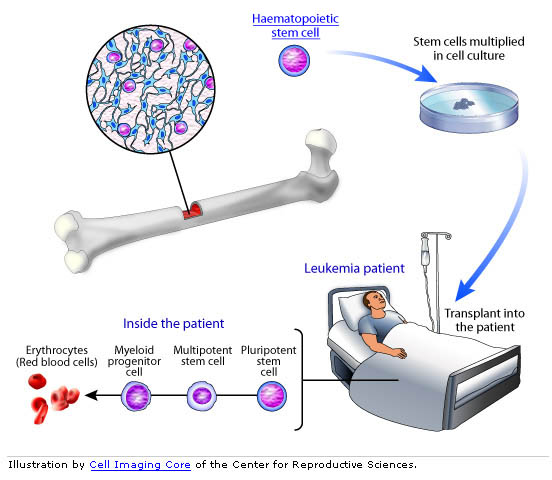 What is an early stem cell?

Often called embryonic stem cells, early stem cells are found in the earliest human cellular formations. In normal human reproductive development early stem cells become all the cells of the body, making them pluripotent. When extracted from the inner cell mass of a blastocyst, early stem cells grow easily in cell culture and can multiply into many stem cell lines that can be maintained for a long period of time. Early human stem cells are thought to be an important source of potentially all types of clinically relevant cells that could become replacement tissue (e.g., organs) in the future or be used to treat and prevent disease.

What is a blastocyst?

A blastocyst is a thin-walled hollow sphere made up of an outer layer of cells, a fluid filled cavity, and an inner cell mass containing pluripotent stem cells. Also called the blastula, the blastocyst develops after cleavage and prior to implantation at approximately five days. Further reproductive development occurs only if the blastocyst is successfully implanted in the uterus. How big is a blastocyst?

A blastocyst is a microscopic group of cells — smaller than Roosevelt’s eye on the face of a U.S. dime. At day five when stem cells can be harvested, a blastocyst is approximately 0.1 to 0.2 millimeters (0.0039 to 0.0079 inches) in size. Where do stem cells come from? What is the primary source of blastocysts for research?

The primary sources of blastocysts for use in stem cell research are pre-embryos created by the in vitro fertilization process and donated by consenting adults once they are no longer needed for reproductive purposes.

When were early human stem cells first isolated from IVF-blastocysts?

Early human stem cells were first isolated in 1998 by Dr. James Thomson and his research team at the University of Wisconsin. For more information on Dr. Thomson’s research please visit his web site at the University of Wisconsin. Between 1998 and 2001, approximately 78 early stem cell lines have been created using IVF-blastocysts globally. For a table with information on the 78 stem cell lines, click here. How many unwanted pre-embryos are there in the United States?

According to a survey conducted in 2003, there are approximately 400,000 unwanted pre-embryos in the United States. (Source: Hoffman, D.I., et al. 2003. Cryopreserved embryos in the United States and their availability for research. Fertility and Sterility 79: 1063-1069.) These pre-embryos are no longer needed for fertility purposes and remain frozen or will be destroyed.

Are there any new sources of blastocysts for research that do not involve a fertilized egg?

Somatic cell nuclear transfer (SCNT) was successfully employed in 2004 to create the first human blastocyst from an unfertilized egg for the purposes of extracting early stem cells for research. Prior to 2004, SCNT was only used for animal research.

Somatic cell nuclear transfer (SCNT) is a laboratory procedure that produces a blastocyst from an unfertilized egg and an ordinary adult somatic cell (e.g., from a single skin cell). While SCNT techniques have been utilized in animal research for many years, human pluripotent stem cells were only first derived from SCNT-blastocysts in 2004 by a South Korean research team.

How does SCNT work?

SCNT substitutes the nucleus of a somatic cell (which contains all the genetic information of the patient) for the nucleus of a donated egg that has not been fertilized. In cell culture, this customized egg is then coaxed with an electronic or chemical catalyst to develop into a zygote as if it had been fertilized. The zygote begins cell division and develops into a ball of cells called the morula and then into the blastocyst at approximately five days. The inner cell mass of the blastocyst is then removed to generate a pluripotent stem cell line. After the inner cell mass is removed, the blastocyst is no longer capable of further development. When can we expect results from SCNT?

The SCNT methodology is still in its infancy. Researchers hypothesize that when the genetic information from the cells of a patient is used, the pluripotent stem cells will be able to make customized tissue that will not be rejected by the patient. SCNT researchers contend that the knowledge gained about developmental biology via the SCNT methodology will allow future researchers to create individualized pluripotent stem cell lines without needing fertilized eggs as sources.

Can SCNT be used to clone humans?

The purpose of SCNT is to find cures and therapies to treat human disease. SCNT awakens the natural capacity for self-repair that resides in a person’s genes. While SCNT has been the technique used to clone animals like “Dolly” the sheep, there is no evidence that it could also successfully clone a human due to the increased complexity of the human organism.

Blastocysts produced by a fertilized egg (IVF) and SCNT are considered by many to be fundamentally different, and no SCNT-blastocysts should ever be implanted in a uterus. There is no conception of new life via SCNT.

Despite the biomedical research advances of the last 50 years, much is still left to be discovered in human biology and millions of people still suffer from devastating diseases. Early human stem cell research is viewed by many as a key to understanding many of the most fundamental questions in basic and clinical biology that can lead to treatments and cures, and ultimately save lives.

With a better understanding of early cell development, researchers expect to increase their knowledge of why cells behave abnormally and produce diseases such as cancer. Research on early human stem cells may also reduce a number of barriers posed by animal studies, which can be a major limitation in getting new therapies to market.

It is expected that early human stem cells could be used to create an unlimited supply of cells, tissues, or even organs that could be transplanted to restore function lost to disease and injury. While early stem cell research in humans is still in its infancy and specific treatments have not yet been developed, many experts expect treatments will be possible in the future for the following types of illnesses, injuries, and diseases:

While no early stem cell therapies are being used in humans yet, a number of recent research studies demonstrate success in animals. Some of those research efforts include: