Radial symmetry means that the body is a hub, like a bicycle wheel, and tentacles are spokes coming out of it (think of a starfish). As larvae, echinoderms are bilaterally symmetrical. As they mature, they become radially symmetrical.

Most adult echinoderms live on the bottom of the ocean floor. Many echinoderms have suckers on the ends of their feet that are used to capture and hold prey, and to hold onto rocks in a swift current.

The sea star’s top surface (or skin) looks spiny if you examine it. If you look very closely you will notice that there are different types of growths on the surface. Some bumps are used to absorb oxygen, they are called dermal branchiae. Pedicellaria are pincher-like organs used to clean the surface of the skin. Barnacle larvae could land on a sea star and start growing if it were not for these organs. Each ray of a sea star has a light sensitive organ called an eyespot. Though it can not see nearly as well as we do, sea stars can detect light and its general direction. They have some idea of where they are going. Can Sea Stars Grow New Arms?
Given enough time, sea stars can grow back arms that have been damaged or removed. For a few species, the severed arm can grow back into a complete sea star! For most sea stars, however, a severed limb dies.

What Do Sea Stars Eat?
Sea stars eat many things. A sea star’s diet can include: barnacles, snails, sea urchins, clams, and mussels. A few species, such as the spiny star of the North Atlantic, eat other sea stars! Many sea stars eat mussels and clams in an interesting way. They surround the shell and use the suckers on their feet to pull the two shells (or valves) apart. The sea star has enough force in its arms to actually bend the shell! This creates an opening between the two shells that is only .01 inches wide. Using this tiny gap, the sea star puts its stomach into the clam’s shell and eats its insides. When it is done, nothing is left but an empty shell. Dissection showing where cardiac stomach opens into the mouth Close up of madreporite and stone canal 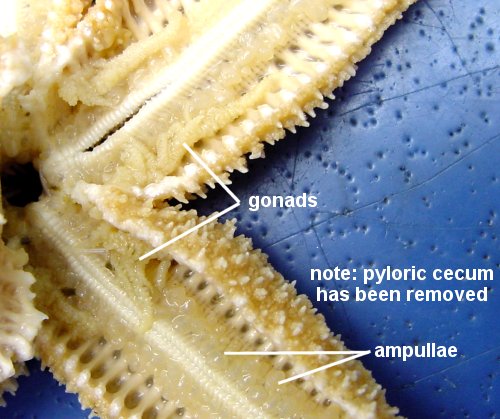 Dorsal view of a dissected starfish showing gonads and ampullae