A. Cell membranes help organisms maintain homeostasis by controlling what substances may enter or leave cells

B. Some substances can cross the cell membrane without any input of energy by the cell

C. The movement of such substances across the membrane is known as passive transport

D. To stay alive, a cell must exchange materials such as food, water, & wastes with its environment

E. These materials must cross the cell or plasma membrane F. Small molecules like water, oxygen, & carbon dioxide can move in and out freely H. The Cell Membrane is semipermeable or selectively permeable only allowing certain molecules to pass through

B. Small molecules can pass through the cell membrane by a process called diffusion

C. Diffusion across a membrane is a type of passive transport because it does not require energy

E. Diffusion is driven by the kinetic energy of the molecules

F. Kinetic energy keeps molecules in constant motion causing the molecules to move randomly away from each other in a liquid or a gas

G. The rate of diffusion depends on temperature, size of the molecules, & type of molecules diffusing

J. Most short-distance transport of materials into & out of cells occurs by diffusion

K. Solutions have two parts — the solute which is being dissolved in the solvent

L. Water serves as the main solvent in living things

N. Diffusion continues until the concentration of the molecules is the same on both sides of a membrane

O. When a concentration gradient no longer exists, equilibrium has been reached but molecules will continue to move equally back & forth across a membrane

A. The diffusion of water across a semipermeable membrane is called osmosis

C. Movement of water is down its concentration gradient & doesn’t require extra energy

G. Water molecules will cross membranes until the concentrations of water & solutes is equal on both sides of the membrane; called equilibrium

H. At equilibrium, molecules continue to move across membranes evenly so there is no net movement I. Hypertonic Solution
1. Solute concentration outside the cell is higher (less water)
2. Water diffuses out of the cell until equilibrium is reached
3. Cells will shrink & die if too much water is lost
4. Plant cells become flaccid (wilt); called plasmolysis

J. Hypotonic Solution
1. Solute concentration greater inside the cell (less water)
2. Water moves into the cell until equilibrium is reached
3. Animal cells swell & burst (lyse) if they take in too much water
4. Cytolysis is the bursting of cells
5. Plant cells become turgid due to water pressing outward against cell wall
6. Turgor pressure in plant cells helps them keep their shape
7. Plant cells do best in hypotonic solutions

K. Isotonic Solutions
1. Concentration of solutes same inside & outside the cell
2. Water moves into & out of cell at an equal rate so there is no net movement of water
3. Animal cells do best in isotonic solutions

IV. How Cells Deal With Osmosis

A. The cells of animals on land are usually in isotonic environment (equilibrium)

B. Freshwater organisms live in hypotonic environments so water constantly moves into their cells E. Some marine organisms can pump out excess salt

A. Faster than simple diffusion

B. Considered passive transport because extra energy not used

C. Occurs down a concentration gradient

D. Involves carrier proteins embedded in a cell’s membrane to help move across certain solutes such as glucose

E. Carrier molecules change shape when solute attaches to them 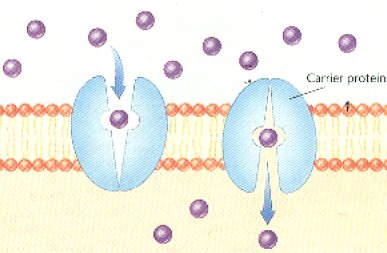 G. Channel proteins in the cell membrane form tunnels across the membrane to move materials

H. Channel proteins may always be open or have gates that open & close to control the movement of materials; called gated channels

I. Gates open & close in response to concentration inside & outside the cell

A. Requires the use of ATP or energy

D. Used to move ions such as Na+, Ca+, and K+ across the cell membrane

G. Plants use active transport to help roots absorb nutrients from the soil (plant nutrients are more concentrated inside the root than outside)

A. Moves large, complex molecules such as proteins across the cell membrane D. Phagocytosis is one type of endocytosis
1. Cell membrane extends out forming pseudopods (fingerlike projections) that surround the particle
2. Membrane pouch encloses the material & pinches off inside the cell making a vesicle
3. Vesicle can fuse with lysosomes (digestive organelles) or release their contents in the cytoplasm
4. Used by ameba to feed & white blood cells to kill bacteria
5. Known as “cell eating”

F. Exocytosis is used to remove large products from the cell such as wastes, mucus, & cell products 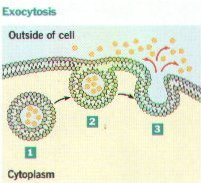 G. Proteins made by ribosomes in a cell are packaged into transport vesicles by the Golgi Apparatus

H. Transport vesicles fuse with the cell membrane and then the proteins are secreted out of the cell (e.g. insulin)